Politecnico di Milano offers many opportunities to live the educational experience in the field. In the various international competitions in which we participate, students can apply the knowledge acquired during their studies on concrete projects and develop at the same time soft skills fundamental in the working life. 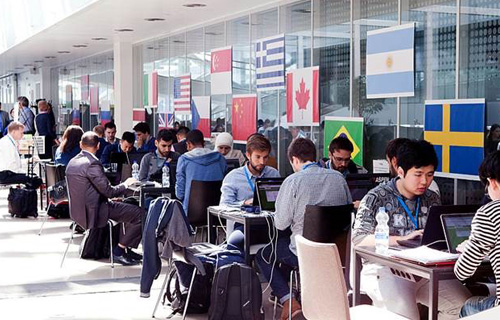 International competition that offers the participants the chance to experience the life of a manager and manage their own business. It includes a simulation articulated into several games with increasing complexity, played by teams of 4 students.
Each student, taking on a different corporate role, must make heterogeneous decisions with the objective of keeping a company financially solid and profitable on the market, with earnings that are greater than those of their opponents.
Participation in the Global Student Challenge has three phases: curricular, as part of specific courses; regional, where the best students are selected at a national level; global, where the winners of the regional competitions compete against the best 30 teams at a global level.
The participating universities abroad are: Windesheim University of Applied Science, Franhofer Institute of Technology, Warwick, St. Gallen, Coppead Graduate School of Business and many others. 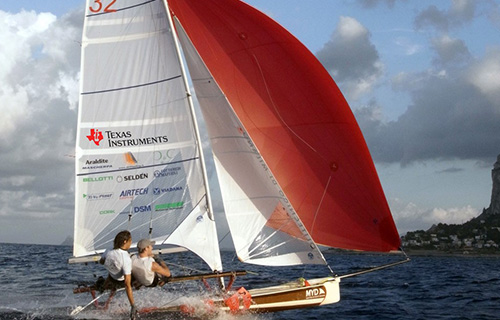 Inter-university project that combines research, innovation and sports in a sailing competition open to vessels designed and built by university students. An invaluable occasion for activating and experimenting new integrated educational models in the field, based on the inter-disciplinary nature of the teams of educators and students, as well as for developing soft skills and managerial capabilities.The POLIMI Sailing Team was founded in 2007. Developing and building boats, combining advanced technologies and ambitious expectations. Research is concentrated on BAAM additive technologies for nautical uses, control sensors for stress exerted on the hull and sails and on the loT.
Polimi Sailing Team activities have involved more than 120 students,who today are filling important roles in the nautical world.The event has taken on an international character with the participation of Göteborg, Karlsruhe, Nantes. Asian and Middle Eastern universities have also shown interest in future participation 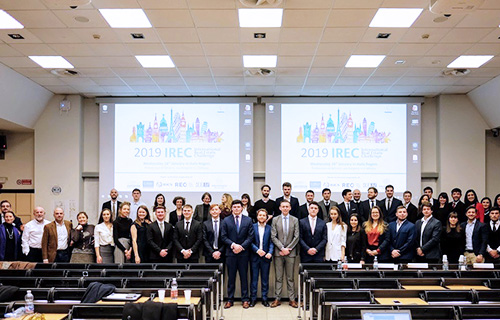 Annual competition founded in 2002, where European universities participate in the development of real estate projects based on the specific needs of the investor.
Up to 80 students from different countries make up the inter-disciplinary teams with 4-8 members. These teams prepare their activities remotely under the supervision of their professors in their respective universities.
The participants develop their projects by working together face to face for two weeks. Through a "real life" project, they develop their ideas to produce a project to be presented before a jury of experts. The best three teams present projects to investors, who select the winner.
The challenge is sponsored by RICS - Royal International of Chartered Surveyors. The participating universities are: Helsinki, Weimar, Reading, Göteborg, Washington DC, Warsaw, Bratislava, Moscow, Dublin. 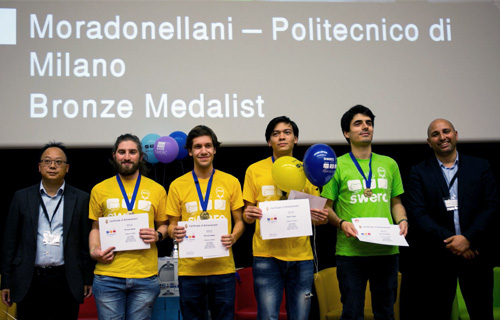 This event is held annually with 3-person teams of students studying computer engineering and similar subjects.
The competition is focused on problem-solving skills, and present students with several algorithmic problems to be solved within a limited timeframe. In addition to the typical basic technical computer skills, the 3 participants must also coordinate well together and demonstrate the ability to rapidly identify the easiest problem to resolve, as well as precision.
The major European universities participate in the competition, sending 1 - 3 teams.
In 2018, several universities participated on behalf of France from Paris, Lyon, Rennes, Rouen, Artois, ,Montpellier, Grenoble; for Switzerland, ETH, USI; For Spain UPC, UPV, Murcia, Complutense, Harbor Space, Rey Juan Carlos, Valladolid, Pompeu Fabra; For Portugal, Porto, Lisbon, Beira; for Israel, Haifa, Technion, HIT; for Italy, in addition to Politecnico of Milan, also Bologna, Rome, Milan, Trento, and Pisa. 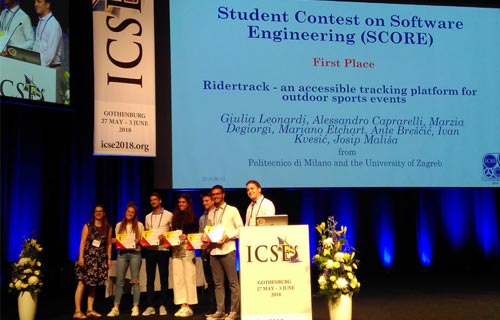 A competition with the objective to promote software engineering in universities at a global level. Each group develops a software project selected from a list of proposed projects sponsored by the members of the SCORE program committee. The result to be produced is a document and an executable software system. The assessment is based on the quality of all the aspects of the group's software development process and the quality of the resulting system.
The competition is linked to the International Conference on Software Engineering, the flagship conference for the entire sector.
In addition to the Politecnico of Milan, the recurring affiliations include: University of Oregon, University of Texas at Austin, University of Ottawa, Pontifícia Universidade Católica do Rio Grande do Sul, New Mexico State University, Aalto University, University of Adelaide). 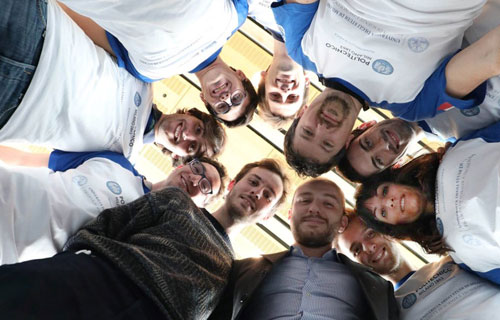 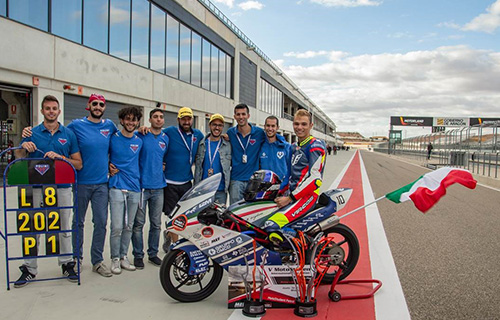 Biennial international competition open to all engineering universities around the world, for students who design, create and compete with a prototype motorcycle.
There are two categories: Petrol, with an internal combustion engine, and Electric. Each team receives only the motor, hubs, a set of slick tires and the braking system from the organization. The rest of the motorcycle is built by the teams, which designs and creates all the missing components: the chassis, suspension system, exhaust, hull, electronics. The prototype is then tested and evaluated by the jury at the finals at the Motorland Aragòn FIM Circuit.
The two main phases of the competition are the project report and the performance assessment with testing on the track: braking, gymkhana, acceleration, timed hull disassembly, and race.
The following universities participated: Universitat Politècnica de Catalunya, Madrid, València, Konstanz, Stralsund, Lisbon, ETH Zurich, Nottingham. 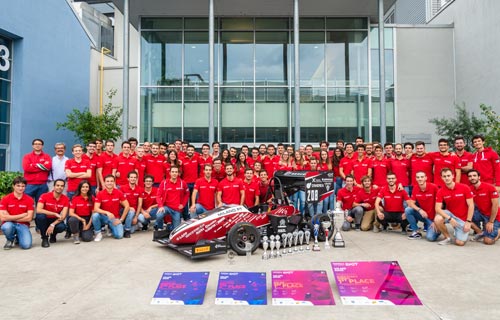 Founded in 1981 as a competition exclusively for students, with the design and realization of a prototype with Formula style internal combustion engine.
The Politecnico of Milan team is the first Italian team and one of the top teams in the world.
The project offers the possibility of direct contact with the Italian industrial community. An opportunity for developing skills, including: design for manufacturing, design for cost reduction, team working skills. In fact, the team is structured like a company, following the same logic. The development of a business model based on the vehicle and a very detailed cost report complete the project.
The universities that participated in the last edition of the event include: Karlsruhe, Darmstadt, Graz, Stuttgart, Hamburg, Brno, Padua, Haifa, Wroclaw , Dortmund, Munich, Berlin, Glasgow, Vienna, Plzen, St. Petersburg, Karlstad, Hamburg, Aachen, Thessaloniki, Melbourne, Birmingham, Valéncia 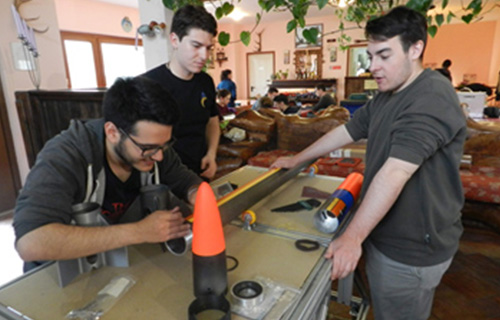 A student association founded in 2012, aimed at building sounding rockets, alongside another two parallel projects: a fixed wing drone and a hybrid rocket engine.
In 2014 the Rocksanne 1-X (R-1X) was launched, the first Skyward missile. After almost 4 years in development, Skyward launched a 4-meter long supersonic rocket, the successor of R1-X, called Rocksanne 2-Alpha (R-2A), in addition to the first interaction with the hybrid rocket engine designed by the students in the association.
This alongside another parallel project on another missile, R2a-Hermes, which had two fundamental objectives: to be a test bench for testing R2a subsystems, like the electronics or the recovery system using the Rogallo Wing, and preparing the newly arrived students for the larger and more complex main project.
The universities we collaborate with are: Stuttgart, Delft, Warsaw, TU Wien. 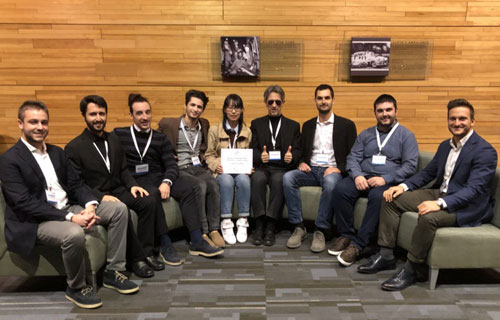 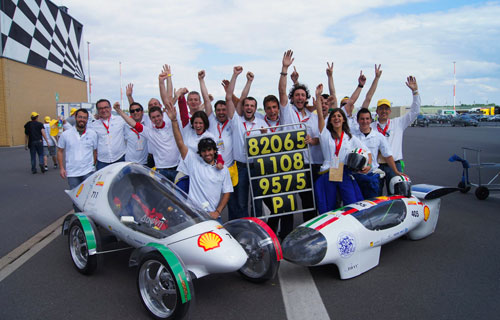 An international competition for student teams coming from high schools and universities from around the world. It offers a collaborative platform for obtaining practical experience in reaching energy efficiency.
The objective is to stimulate the teams through a racing competition, where they are involved in designing and creating high energy efficiency vehicles. The competition awards the teams that have the lowest energy consumption on a specific race track.
The team from the Politecnico of Milan, "Mecc E-", has been participating in the competition regularly since 2005. The team has participated with an electric battery-powered vehicle in the "Shell Eco Marathon Europa" in the "Urban Concept" class since 2011.
The international event involves: Munich, Twente, Technical University of Denmark, INSA Tolouse, Liege, Politecnico of Turin, Aalborg, Saskatchewan, Brigham Young, Toronto, Norwegian University of Science and Technology. 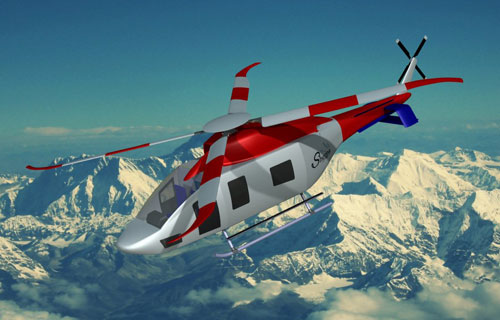 Organized by the Vertical Flight Society, it is the main competition at a global level in the vertical take-off aircraft sector.
The them is conceptual and preliminary design of an aircraft with vertical take-off and landing capabilities, according to specific performance parameters, typically very challenging and different for each edition.
The Vertical Flight Society design competitions offer an excellent opportunity for participating students to solve a real problem, focusing on the the rotary-wing, an excellent component in the curriculum of the Master's Degree course in Aeronautics Engineering at Politecnico.
The participating universities include: University of Maryland, Georgia Institute of Technology, Virginia Polytechnic Institute and State University, Pennsylvania State University, St. Louis University, TU Delft, University of Liverpool, Nanjing University of Aeronautics and Astronautics, Beihang University. 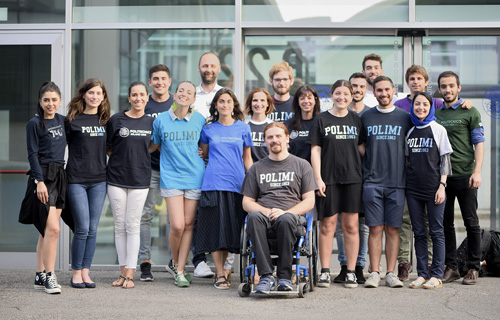 People with disabilities compete in performing daily tasks using latest generation assistive technologies.The POLIMI team is participating in the FES bike category (Functional Electrical Stimulation Bike), where a paraplegic pilot is competing using a passive trike and electrical muscle stimulator capable of sending chains of coordinated impulses through superficial electrodes that induce contraction in paralyzed muscles. Work groups optimize the mechanics and seat of the trike starting with a commercial system; installation of sensors on the trike; identification and optimization of stimulation strategy; transfer of the control system to an embedded system; development of user interface and a diagnostics software. In the previous editions: Brasilia, Lyon, Berlin, Sydney, Cleveland, Case Western Reserve, Hong Kong, University of Electro-Communications, Mahidol, Burgdorf and Nottwil. 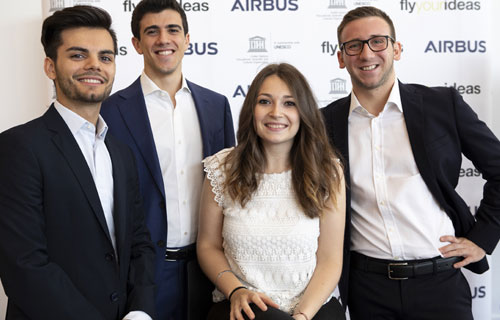 An international contest for innovative ideas in the aerospace field, organized by Airbus and UNESCO every two years.The competition is highly multidisciplinary. The projects most feasibly achievable in the immediate future and which have already tackled technical-scientific, social, management and sustainable aspects will be awarded. Students must therefore use both already acquired and totally new knowledge.In the finals they will work closely with a university tutor, a company tutor and technicians in the Airbus prototyping workshops. During the final stage, they will be assisted by Airbus staff for the preparation of the presentation, which will be held in front of a jury of experts and an audience of a few hundred people.The competition is open to universities from all over the world, not necessarily in the technical or scientific area. Technische Universiteit Delft, Cambridge, La Plata, Saarland and Strathclyde participated in 2019.